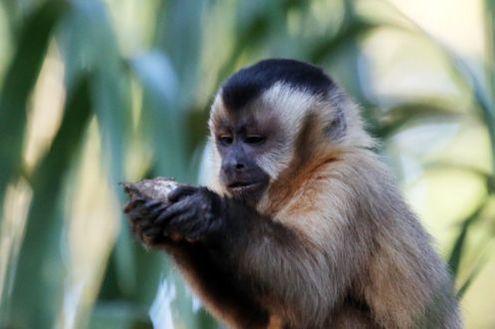 -Males tend to be larger, heavier, and have larger canines than females

-This monkey is only found in South America (Colombia, Ecuador, Peru, Bolivia, Brazil, French Guiana, Suriname Guiana, and Venezuela), inhabiting almost every type of forest in the Neotropics.

-Their tails are about the length of the rest of their bodies and are considered ‘prehensile’, meaning they are used for grabbing and holding onto objects. The tail is mainly used for feeding and foraging or hanging from branches. The tail also helps with stability of the body while sitting, and assisting in directional changes when in motion

-During movement, the monkeys use their ability to jump far and their strong arms and appendages to hold onto surfaces and to swing.

-Omnivorous:
Plants: fruits, leaves, flowers, nectars, nuts, seeds, and piths
If fruits or nuts cannot be opened with the teeth or jaws, tools are used to reach the flesh.
Oftentimes fruits are opened by smashing them on tree surfaces
Animals: insects, frogs, lizards, birds, and young titi monkeys

-Highly social: they live in groups of 5-15 members with a dominant male
The alpha drives away predators, gets first preference during foraging, and mates the most often
Social grooming is common
Sharing care of young by multiple females is also common

-Reproduction:
These animals are polygamous (multiple partners)
During estrus (heat), the female will change her vocal calls and use certain postures to attract males

-There is no set breeding season, though most births occur during the dry or early rainy season (October-January)

-Offspring: 1 infant per female
-Infants cling to mothers’ backs during first 3 months of life
-Around 6 months of age, young start to take care of themselves and eat solid foods, with milk from their mothers
-At this time, they start to interact with the alpha male and mimic the behavior of adults

HERE AT ALAMEDA:
We have 8 capuchins here, a mix of female and male. Can you identify the alpha male by his behavior? His name is ‘Eyebrows’ because he likes to raise and lower his brow in quick succession.